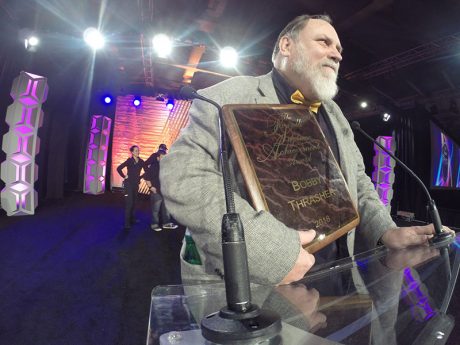 ANAHEIM, CA — The 17th annual Parnelli Awards gala, held Friday, Jan. 26 at the Anaheim Hilton during NAMM 2018, honored Bobby “Boomer” Thrasher, Jonathan Smeeton and John Stadius with the Lifetime Achievement Award, Visionary Award and Audio Innovator Award, respectively. One of Boomer’s clients, Billy Joel, sent in a video tribute to his longtime production manager. “There’s nothing he can’t do,” Joel said, noting how Thrasher had assisted with everything from fixing Joel’s bikes, boats and cars to handling the surgery for his hip replacements and delivering his baby daughter.

After the joking, Joel went on to offer his sincere gratitude, for “a long and fruitful collaboration. We’ve all relied on you to help you make the trains run on time. From Russia to Manila, Berlin to Cape Town, and around the world dozens of times, you’ve been there, leading the team with your quiet strength. Your guys would go the extra mile for you, and so would I. So congratulations on a great career. And stick around. We need you.”

Before Thrasher stepped up to receive his honor, presenters Steve Cohen, longtime LD for Billy Joel, and Ricky “Chainsaw” LaPointe kept the tributes coming, with LaPointe underscoring the total devotion Thrasher was able to inspire among his crew. “He fought hard for his crew. And his crew would be there for anything he needed,” LaPointe said. “We would follow him down any given path, any dark alley and any time of day or night.” 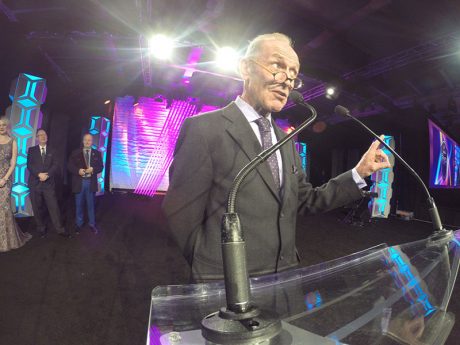 Other presenters included Eric Loader and David Milly, who welcomed renowned lighting designer Jonathan Smeeton to the stage. Smeeton, who has lit top acts since he got his start at the dawn of the rock concert era as Liquid Len back in the 1960’s, is currently LD for Diana Rossi, and seems happy to continue blazing new trails for others to follow.

Presenter James Gordon, group CEO of DiGiCo parent company Audiotonix, cited John Stadius’ penchant for a blend of scientific curiosity and taste for danger when he tested the theory of whether the fearsome barracuda would swim away with part of a limb if it were sporting a bright, shiny wristwatch. (In Stadius’ case, thankfully, the fish opted against karmic payback for all the other fish Stadius has caught in his travels.)

Tour manager Richard Fernandez, last year’s Lifetime Achievement honoree, and production manager Chris Adamson were among several members of the Tom Petty & The Heartbreakers camp to receive awards this year. The late rocker had appeared at the 2016 Parnelli gala to give a heart-felt tribute to his crew at the Parnelli Awards before they all hit the road one last time for Petty’s final tour in 2017. Along with Fernandez and Adamson, FOH mixer Robert Scovill, monitor mixer Greg Looper, system tech Vic Wagner and production companies VER and Sound Image all took the stage to receive Parnellis this year. 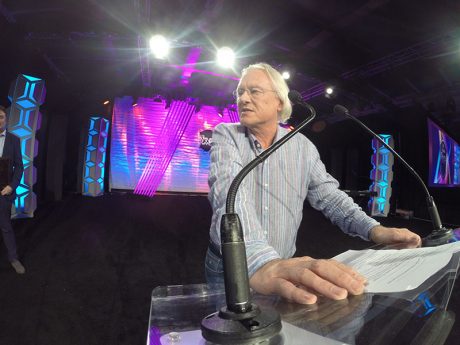 Parnelli Executive Producer Terry Lowe also appeared at the show with a witty, brief talk, and despite the extra time that Boomer needed to credit anyone and everyone who has ever supported his efforts, the entire event managed to finish three minutes ahead of the 10 p.m. target.

The recipients of Parnelli Awards at the 17th annual ceremony follow: